Warning: Use of undefined constant HTTP_USER_AGENT - assumed 'HTTP_USER_AGENT' (this will throw an Error in a future version of PHP) in /var/www/html/linuxbyimraan.co.za/wp-content/themes/voice-blog/header.php on line 1
 6 Stages of Linux Boot Process (Startup Sequence) sysVinit: – LinuxByImraan
Skip to content

Press the power button on your system, and after few moments you see the Linux login prompt.

Have you ever wondered what happens behind the scenes from the time you press the power button until the Linux login prompt appears?

The following are the 6 high level stages of a typical Linux boot process. 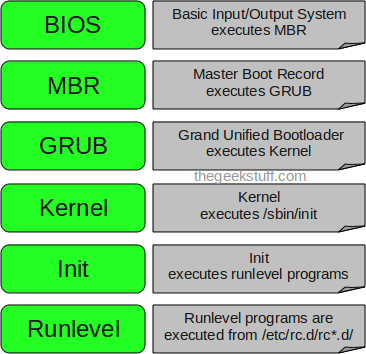 There you have it. That is what happens during the Linux boot process.