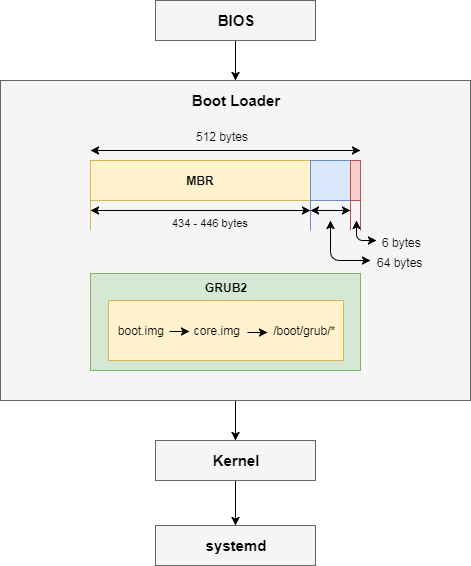 To be very brief this phase includes loading of the boot loader (MBR and GRUB/LILO) into memory to bring up the kernel.

To check the GRUB2 version used

# grub2-install -V
grub2-install (GRUB) 2.02~beta2
With legacy GRUB we had thre different stages i.e.
Stage 1 -> Stage 1.5 -> Stage 2
But with GRUB2 these stages do not exist anymore instead GRUB2 contain various *.img files as explained below

boot.img
On PC BIOS systems, this image is the first part of GRUB to start. It is written to a master boot record (MBR) or to the boot sector of a partition. Because a PC boot sector is 512 bytes, the size of this image is exactly 512 bytes.

core.img
This is the core image of GRUB. It is built dynamically from the kernel image and an arbitrary list of modules by the grub-mkimage program. Usually, it contains enough modules to access /boot/grub, and loads everything else (including menu handling, the ability to load target operating systems, and so on) from the file system at run-time. The modular design allows the core image to be kept small, since the areas of disk where it must be installed are often as small as 32KB.

Once executed, core.img will load its configuration file and any other modules needed, particularly file system drivers at installation time based on the location using which the system is getting booted as explained below