Warning: Use of undefined constant HTTP_USER_AGENT - assumed 'HTTP_USER_AGENT' (this will throw an Error in a future version of PHP) in /var/www/html/linuxbyimraan.co.za/wp-content/themes/voice-blog/header.php on line 1
 TCP connection states – LinuxByImraan
Skip to content

TCP is the abbreviation for Transmission Control Protocol. It is one of the core protocols in the internet protocol suite and provides a reliable protocol to communicate in computer networks. Nearly every Internet-connected device “talks” TCP and the whole Internet relies on it.

More about the TCP protocol can be found on Wikipedia or Simple Wikipedia.

To display listeners and connections on Linux you’ve to use the  netstat or ss command. While older Linux boxes only support netstat, newer Linux distributions use netstat and  ss in parallel. However, with the introduction ofss,  netstat is marked as deprecated.

There are a lot of options and here are some common ones:

Combing all these options will result in an mnemonic for german speaking people:

The most common states are relatively simple: LISTEN, CLOSED and ESTABLISHED. Most of the developers don’t need to know more about TCP states, because this is what an application really cares about. However, there’s more going on under the hood of the TCP stack.

How a connection is initiated

Let’s have a look into how a TCP connection will be initiated.
Before a TCP connection can be opened, you need to have a server with a listener. The listener will listen on incoming connections on a specific port. This state is represented as LISTEN. 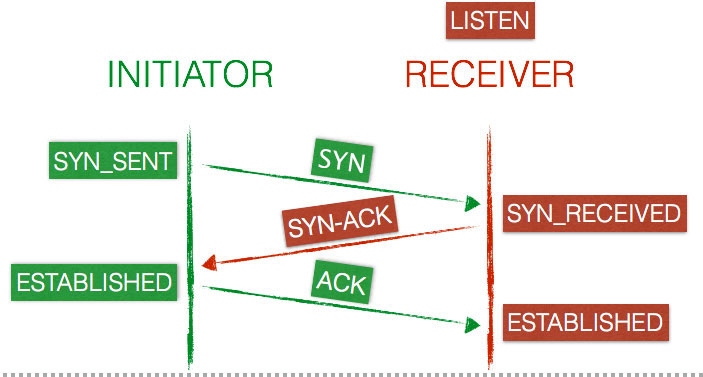 Now the client and the server are ready to transfer data.

How a connection is terminated 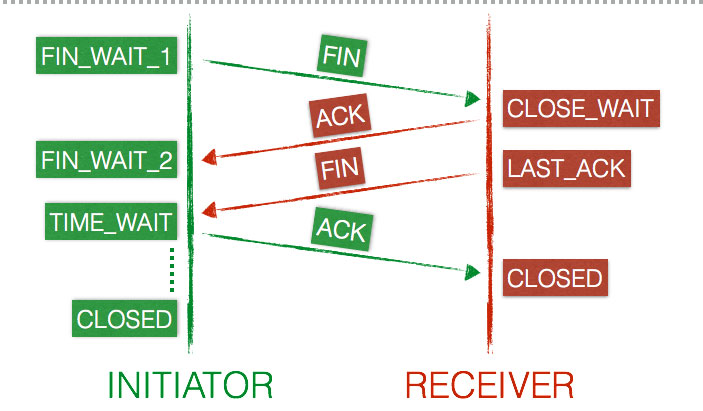 We already wrote that the termination of a connection is a four-way handshake. So while the connection is terminated from a client point of view, the server has to terminate its connection as well. This happens directly after the server sent its last  ACK.

There’s also a three-way handshake alternative available, which occurs when the server sends its ACK+FIN in one single packet (server goes from ESTABLISHED to LAST–ACK in a single step).